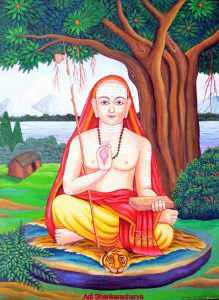 Around 507 B.C. there descended on the sacred, deeply adorable soil of this holy land a personality extraordinary who by the sheer force of his matchless erudition, enlightened the whole world. He was none other than Acharya Adi Shankara, a very embodiment of Lord Shiva, tenth in the line of Guru traceable back to Sriman Narayana himself. He had dispelled all the dark forces that were hitting hard at the very foundation of Sanatana Dharma and flew the banner of Sanatana Dharma, thus establishing its invulnerability once for all. All this he accomplished solely by his all-too-rare spiritual wisdom, luster and strength, in short, his spiritual process.

His holiness Adi Shankaracharya was born in Kaladi villege of Kerala. His father’s name was Shivaguru and mother’s name was Sati Aryamba. He was a Nambudaripad Brahmin by cast. He was born on Yudhisthir Sambat 2631 in 507 B.C. on Vaishakha Sukla Panchami on Sunday. His thread ceremony took place at the age of 5 years. Taking his mother’s blessings, he left home to take a life of Sanyasa, initiated by Shree Govindapadacharya on the auspicious day in the Kartik month on Devothana Ekadashi. From the age of 5 to 8 years, Acharya Shankara learnt the Vedas, Vedanga, Dharma Shastra, Purana, Itihasa and Budhagama etc. According to Sanatana Dharma and Shiva Purana, Hindus call Adi Shankaracharya as reincarnation of Lord Shiva. According to Adi Shankaracharya philosophy all the four Peeth’s Acharya are known as Shankaracharya.

Acharya Shankara within a short span of sixteen years re-established Sanatana Dharma after overcoming not only Budhism and other directionless religions. His holy body left in demise at the age of 32 years in the year 2663 says 475 B.C. on the holy day of Kartika Poornima.